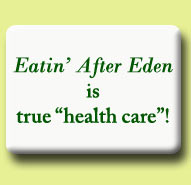 We usually make half lunch or dinner raw organically grown vegetables such as dark green lettuce, cherry tomatoes, celery, avocado, and the like. Vitamins B complex and C are water soluble, are not stored in the body, and are heat labile; destroyed when cooked, whereas fat soluble vitamins A, D, E, and K are absorbed by and stored in fats.

A Cornell University study reveals that the popular meat-free diet long term alters DNA such that people become increasingly more susceptible to inflammation proven to increase their risk for heart disease and colon cancer, the top two killers of Americans.

Grass-fed beef and lamb, moose, elk, oxen, and fatling calves1---information regarding these and all the following reasons for eating red meat, are included in Eatin' After Eden.

In Chapter 3 readers will learn about the highest quality protein, and of the fascinating experience of Dr. Vilhjalmur Steffanson who avoided any nutritional deficiency, including vitamin C found in raw, red meats, after a year of such diet..

(Pork, "the other white meat," so called by the National Pork Board for an advertising campaign to overcome indoctrination of the public against red meat in favor of chicken and turkey, was recently approved for a 150° drop in the recommended cooking temperature. The US Department of Agriculture [USDA] guidelines allow 145° F as measured by a food thermometer, with a three-minute rest time, as a "safe final internal cooking temperature." Eatin' After Eden presents serious scientific, and scriptural arguments explaining why this may not be the case after all.)

Often toddlers and young children will eat tender beef when they won't touch other meats. We alternate these nutrient-dense treats at lunch as our main meal: beef, including liver, chicken, turkey, lamb when available, and sometimes meatless main meals using complementary protein. (We no longer consume anything from the plastic-saturated ocean, including sea salt [use Utah salt instead]) Wild game (non-scavenger) is enjoyable and healthy eating as well. Breakfast usually includes eggs with cheese or grass-fed beef sausage without nitrates or sugar.

Additionally, this book explains a great deal about each of the ten reasons listed below for enjoying grass-fed, red meat a couple times per week. This book is a good starting place if you are considering vegetarianism or veganism, about which there are two powerful chapters! Except for the first two items, this listing is not in order of importance.

Note too that King Soloman's court and he ate [organic] grass-fed oxen, sheep, hart, roebuck, fallow deer, and fatted fowl. (1 Kings 4:23) A number of other Scriptures also instruct and explain that the work animals not to be consumed were to be fed high-carb food; e.g., "Muzzle not the ox that grinds out the corn [grain]."

These were not the animals that are most often consumed today. In the US, non-grass fed, non-organic meats are most often fattened in unhealthy feed lots prior to market, using antibiotics to keep them alive. Most antibiotics in America are administered to animals that are consumed by humans. It leads to obesity. Thus we should consume only organic meats.

EACH OF THE 11+ CHAPTERS IN EATIN' AFTER EDEN IS A STAND-ALONE-BOOK IN ITSELF—ALL FOR THE PRICE OF ONE! WHEN THE CHAPTERS ARE READ TOGETHER THERE IS A SYNERGISTIC EFFECT THAT CAN EXPONENTIALLY ENHANCE YOUR ACHIEVEMENT OF AN ADVANCED LEVEL OF WELLNESS. 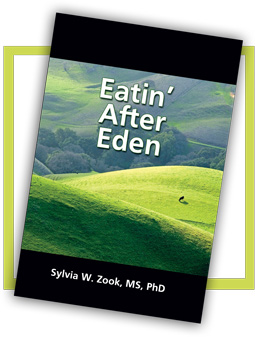 "Eatin' After Eden is full of knowledge, well-written, com- plete, easy to read, and a 'must' for all. Thank you for your diligent work.
I have just finished reading it again, re-reading what I had previously underlined. I want to commend you on your writing this. It is excellently written---and contains much truth that is not found elsewhere. Thank you!"


"Congratulations on one of the most important books ever written for this end time! You have given us essential truths from God's Word and nutrition science that many health care practitioners do not have…Thanks for your time, experience, and expertise!"


"In Eatin' After Eden, Dr. Sylvia Zook translates true science and Biblical teaching into applicable day-to-day guidelines for the modern audience that seeks enhanced health in a fallen world. Many of the premature deaths that befall the western world could be averted if everyone who wanted to bestow the ultimate gift would share copies of this book with friends and family."